Waiting for flight 1474 at Gate A-9 of Sea-Tac International, I watch planes land and sip a Starbucks. My heart is settled, content.

I had no idea how much I needed a weekend away. My 17-year-old and I flew to Seattle Thursday evening. Friday morning we drove to Portland, where we got lunch from a food cart, spent hours in Powell’s Books, then had crabcakes and chowder at Jakes. (Can I just say I LOVE that my kid thinks two hours is not enough time in a bookstore?) We connected with old friends who live here. We gathered with 4000 other folks who care about social justice to listen to John Perkins, Shane Claiborne, Francis Chan and others at the Justice Conference. We had great conversations about the challenging things we learned at the conference.

We drove back to Seattle to wander Pike Place market and ride to the top of the Space Needle.  We went out for Thai food, got a little lost on the way but ended up on Queen Anne hill, overlooking the city lights and illuminated Space Needle, laughing at the providence that put us on a detour with breathtaking views. 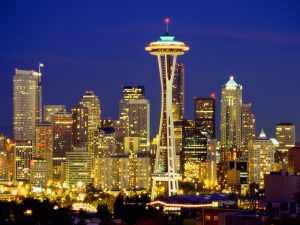 Work has been my focus this winter. I read friends’ Facebook updates about vacations (smart Chicagoans vacation in the winter if we can) and simmered jealous.  I’ve wrestled with our budget, put in extra hours. “You needed a break,” my daughter observed.

We’d planned this trip long ago. What kid asks to attend a Christian conference on social justice for her 18th birthday? Gets giddy over a high five from Shane Claiborne? Mine does.

The next trip I take with my daughter will be a long drive to California, where I will drop her off at college. In the next few months, she’ll make the final decision about which college that will be. She needed a break, too, from thinking about it, the endless applying for more scholarships, answering the questions from well-meaning adults, most of which elicit a sigh and “I don’t know.”

We bought seven different books from four different bookstores, put almost 400 miles on a rental car, stayed at three different hotels in four nights, drank at least a dozen cups of coffee (including one from the original Starbucks). Melanie took more than 500 pictures of everything from flying fish to homeless people, and has deleted that down to about 300.