My son Aaron waded gingerly into the murky water of the pond in the front lawn of our church. Along with hundreds of other people, he was getting baptized. In a large church like ours, baptism is a spectacle of sorts. People picnic on the lawn and cheer as a dozen people at a time are dunked under the water.

Ten feet out from the wooden stairs into the lake was Scott Rubin, the leader of Elevate, our junior high ministry. Scott knows our family, and knows Aaron. In a church that baptizes 300 people at a time and has close to 20,000 attending each weekend, it’s easy to get lost in the crowd. To have someone know you is no small gift.

As Aaron stood between Scott and Jason (another leader from Elevate), I watched from the dock, my camera ready. He had gone into the pond with serious intentions—he did not take this step lightly. But as they stood there, waiting for others to make their way to other pastors and elders standing in the pond, Scott began talking to Aaron. I couldn’t hear what he was saying, but I watched Aaron’s expression change from serious to tender. He looked as if he were about to cry. I lifted my sunglasses so he could see my eyes, which were also filled with tears. Thankfully, my daughter was beside me taking photos, because I was too caught up in the moment to do much with my own camera. 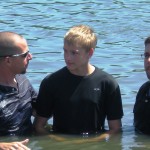 He told me later that Scott had told him, “Aaron, you’ve got a great family, but this is just about you. God is watching you this moment, and this is about you and God.” 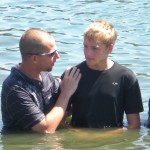 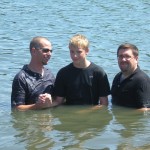 I’m sure that Scott said more to my boy in those few moments in the pond. I know he and Jason baptized a lot of junior high kids that day, and it would be easy for it to begin to feel routine for them. But I am so grateful that he made an effort to speak truth to my son, to affirm and encourage him in this important step. Scott and his wife Lynette have loved on both my kids for years, and I’m so incredibly grateful for their ministry at our church.

We talked at dinner about what happened—in his typical 13-year-old introvert way, he just told us some of the things Scott had said, and that he had felt like he might cry. He didn’t really tell us much about what he had felt, but when he came out of the water, he said he felt “achieved.” Which, I didn’t tell him, is not a feeling, precisely. But I know him well enough to understand.

He’s a quiet, creative child in a family of strong, leader types. But thanks to a sensitive and encouraging leader, he realized that this was his moment. A defining moment, a rite of passage, that no one else could do for him. He was following Jesus on his own, rather than being just swept along in the crowd of our little Christian family, or our big Christian church. To witness this day was a gift. 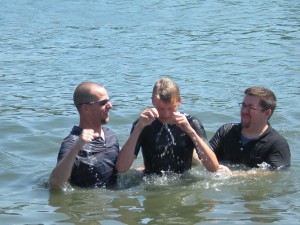