Kitchen gadgets and the family of God

Home/hospitality/Kitchen gadgets and the family of God

Kitchen gadgets and the family of God

This week I’m busy with meetings, Christmas shopping and baking, general holiday craziness. So when our friend Timothy Fall offered to do a guest column inspired by a silly conversation, I thought–why not? I don’t have time to write a blog post this week! So here it is. Enjoy.

Keri and I recently traded emails about kitchen gadgets. (Why? Doesn’t matter.) I mentioned a potato peeler, she compared it to a mandoline slicer, and soon we came to this:

Ah yes, the age old rivalry between the simple potato peeler and the elegant kitchen mandoline. But even though theirs is a relationship fraught with turmoil, woe betide the food processor who tries to show off in their kitchen. Mandoline and peeler are a terrible force when united against a common enemy. 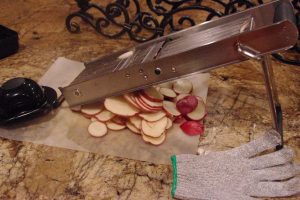 She suggested a series, with the next installment concerning the merits of a hand masher versus a stick blender. I think she’s on to something. But this post is going a different direction.

My wife and I watch the Food Network. A lot. The competitions like Iron Chef, Chopped, Cupcake Wars, as well as the ones that explore new ways of looking at food like $24 in 24 hours and Good Eats. That last one is Alton Brown’s showcase for all things quirky yet practical. 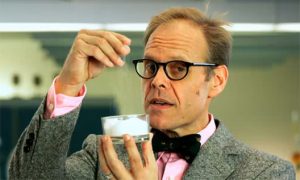 Alton’s show (I can’t refer to him as Brown, because he always seems to be hanging out in the kitchen just across the counter from me) goes into food history, chemistry, and gadgetry. And when it comes to gadgetry, Alton has one basic rule: avoid one-use items. Stand mixer good/bread machine bad, that sort of thing. Kitchens only have so much space, and Alton advocates using it as sensibly as possible.

Alton’s take on kitchen gadgets reminds me of the family of God.

Jesus told us that in his Father’s house there are many rooms, and that he is the one who prepares a place for us in his home. (John 14:1-3.) And unlike Alton’s limited kitchen space, dictating that only the most useful items have a place, Jesus makes a place for all of his people no matter how little use we might be in his family.

Because really, none of us are of little use in our Father’s house. On our own, yes. Jesus said “apart from me you can do nothing.” (John 15:5.) But he also assured us in that same breath that because we abide in him we will “bear much fruit.”

That’s a food network worth being in for eternity.