Santa and other myths

Santa and other myths

When my daughter was a preschooler, one of her favorite movies was Rudolf the Red-Nosed Reindeer, the classic stop motion animation film from Rakin-Bass. (Watch the whole thing on YouTube here) she also loved Santa Claus is coming to Town, made by the same producers in the same unique style.

She had lines and lines of dialog memorized, which she would spout off while riding in her carseat or sitting at the dinner table. “Herbie! There’s a pile-up a mile long behind you!” “I’m just fixing this doll’s teeth.” “Herbie! You’re an elf! Elves can’t be dentists!” There’s this whole terrific theme of misfits who find a home, following your passions, seeing people’s differences as wonderful–it’s a great movie. And yes, it does include Santa Claus.

I think it’s interesting how many Christians have angst over Santa Claus, a myth that developed from the stories of a generous Christian man, St. Nicholas. So yes, I let my kids believe in Santa. I don’t remember ever telling them directly, they sort of picked it up from the culture, and I just played along. And when they questioned it, I would say, “Well, what do you think?” I kept it all very mysterious.

Santa represents, in some ways, grace. I could talk to my daughter as a preschooler about the idea of “grace” all day long. But she didn’t really understand it until she’d experienced it. She was quite verbal–when she was in kindergarten she actually had this conversation with me: “Is Santa going to come?” I simply replied, “Why, have you been bad?” She looked worried and quickly answered, “Well, yes!” I simply smiled and said, “It’s okay.” “I”m just so anxious for him to come,” she told me. And yet, despite her awareness of her own sinfulness, she received some presents that year from Santa Claus. She experienced grace. 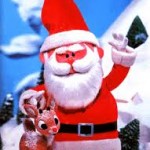 I find it interesting that some Christians don’t want to “lie” to their kids so they sit them down and tell them Santa’s a fraud from the get-go. And sometimes then tell them–don’t tell the other kids at school. (in other words, ask their kids to lie). This is, in my opinion, just wrong. Preschool kids can’t distinguish between fantasy and reality–they watch Toy Story and honestly believe Woody and Buzz Lightyear are real people. And that’s okay. Engaging full-on with pretending is part of childhood we should not steal from them. To actually imagine things is part of how we develop a Christian imagination.

I’m guest blogging at her.meneutics, the Christianity blog for women, about “Why Santa Belongs in Your Kids’ Christmas”  so I hope you’ll go over and read not only my thoughts but the comments. What do you think? Did you let your kids believe in Santa?

My daughter, who is now 17, is at church tonight, with an unbeliever she invited to our Christmas eve services. She loves Jesus and never, ever thought, “if Santa’s  not real, maybe Jesus isn’t either.” She’s smarter than that.