Who would Jesus eat lunch with?

Who would Jesus eat lunch with?

A few weeks before I started college, Jim, an old family friend who’s like an uncle to me, said he had some advice.

“For the first month or so, get to know as many people as you can,” he said. “Here’s how to do it: Every meal, look for someone who is sitting alone, or someone you don’t know. Ask if you can join them, sit down, and ask their name.” He paused, looked at me. “Remember their names,” he added. In other words, Mix It Up At Lunch. Sit with someone you might not ordinarily sit with, and get to know them.

Jim knew that it would be easy for me to sit with people I knew already—his son, a year older than me and a close friend as well, was already a student at Wheaton. His nephew, another person I’d known my whole life, would be in my class.

But he knew those friendships would grow without my even trying. So he challenged me to sit with someone I didn’t know. To reach out to those who might feel alone.

When my daughter started college this fall, I gave her the same advice.

Throughout history, sharing a meal has signified trust, intimacy. Jesus often got in trouble for “eating with sinners.” If we are his followers, we ought to Mix It Up at Lunch, walk across the room and sit with someone we normally wouldn’t.

That seems like the Christian thing to do—to sit with someone you normally wouldn’t. Maybe, even, someone you consider to be “a sinner.” To open the door of friendship over shared bread. After all, that’s what Jesus did. Just look at Mark 2:13-17 or Luke 5:27-31 . 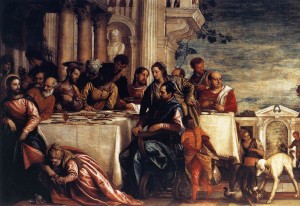 That’s why it both baffles and enrages me that the American Family Association, a conservative evangelical political action group, is protesting AGAINST “Mix It Up at Lunch Day,” a program for school children designed as an anti-bullying initiative, a simple method to reduce prejudice. You read that right. The American Family Association is anti-anti-bullying, which could be construed as being pro-bullying. Which is not exactly a Christian position, right? (sound of crickets chirping…) Right?

On that day, school children are asked to act like Jesus (though it’s a secular program, so they don’t put it that way). The kids are asked to reach out to sit with people they wouldn’t ordinarily sit with. The program, begun 11 years ago, is now in 2500 schools. It is scheduled for Oct. 30. Now, since they kind of “have to” participate  (they are assigned lunch buddies by random numbers), their motives may not yet be aligned with their actions, but it’s a good start, right?

Not according to the AFA, who, according to the New York Times, called this project “a nationwide push to promote the homosexual lifestyle in public schools.” They urged parents to keep their children home from school rather than participate. What???

Because the Mix It Up at lunch initiative was started by the Southern Poverty Law Center, which aims to prevent bullying of all kinds, including bullying of kids who are gay (or often, are labeled incorrectly as gay), the AFA thinks they are “pushing their agenda.” Come on. Really?

It’s maybe not surprising that the American Family Association is against an anti-bullying initiative, since they are bullies themselves.

Like blogger Rachel Marie Stone, I support Mix It Up At Lunch Day because I am a Christian. Which begs the question—which is the Christian (the word means Christ one, a person who acts like Jesus) response? To eat with sinners, or to give in to fear-mongering?

What’s even more astonishing is that within a few days, nearly 200 schools had just cancelled the day, rather than stand up to the bullying of the AFA.

As a Christian, I want to stand up and say that the American Family Association does not represent my views at all. This vocal group is one of the main reasons that Christians are known more for what they are against than what they are for. Conservative Christians are unfortunately known as haters, which is deeply ironic since Jesus said Christians should be known by our love, not our hate.

I hope that Christian parents will stand up, not against Mix It Up at Lunch Day, but against the American Family Association’s nonsense. Be vocal in your support of this day. On the AFA’s website, you can “see if your school is on the list.” If it is, call the school and voice your support.  If it’s not on the list, suggest that your kids’ school actually participate.  If they don’t want to, suggest that your kids stage their own Mix it Up day, or –talk about radical–live like this consistently. Talk to your kids about participating, read stories from the Bible about Jesus having meals with people that religious folks thought were nothing but trouble.

Actually, maybe somebody should read those stories to the folks at the AFA.