Home/Deeply Loved Lent study, Uncategorized/Taking it to the streets on Good Friday

Most Good Fridays, I go to my suburban church where I watch a service that is beautiful, moving, tear-jerking at times. It has been planned out for months, every note of music carefully scripted, every video meticulously edited, the sermon exactingly prepared and powerfully delivered. It is always excellent.

And yet, I can attend, watch, and come away feeling I’ve seen a really good, thought-provoking performance. I can choose to keep emotional distance. (This is not the fault of our amazing programming team, or anyone else. I take full ownership of my own cynicism and detachment.)

On Good Friday, we remember the crucifixion, Jesus’ sacrifice and suffering, at Golgotha, the name of the hill outside Jerusalem where he was executed on a cross. (Read the Bible’s true story of the crucifixion here) The word has also come to mean “a place of sacrifice or suffering.”

So when a good friend invited me to join her on an urban “stations of the cross” service, something nudged my heart and I said yes. It turned out to be a Good Friday unlike any I’d ever experienced.

She invited me to come to the city and walk the stations of the cross with a group of folks from a coalition of churches from that area. Pastors, street ministers, former gang members turned community activists, lay people, and one little girl dressed in bright pink snowpants, walked through the neighborhood, stopping 14 times in the cold wind to read Scripture traditionally associated with the stations of the cross, and to pray for the people of this neighborhood, to pray for peace and healing for this little section of Chicago.

For two hours on a cold, windy spring afternoon, we walked through the neighborhood, a place where expensive homes exist just a few doors away from a variety of public housing or subsidized housing projects. We walked west a few blocks to the Cabrini Green neighborhood, once one of Chicago’s most violent. The high rise public housing buildings have been torn down, but it is still a place where the poor live in the shadow of the wealthy.

Christians who have sacrificed their own comfort to try to bring the light of hope and love to the city have been doing this walk for 30 years. The first year, they stopped and remembered each station of the cross at a spot where someone had been killed. It wasn’t hard to find 14 spots within just a few blocks where someone had been gunned down. These days, the neighborhood has changed, yet violence, drugs, and gangs still leave their mark. 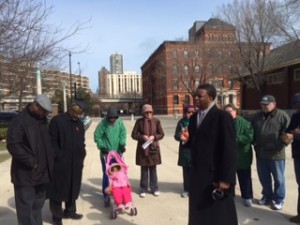 My friend chooses to live and raise her kids in a neighborhood where there are both yuppies and gang bangers; urban redevelopment and drive-by shootings. She and her husband try to be a bridge between these worlds, which often intersect on the street corner outside her house. (There’s been more than one shooting at that street corner, as the street is the dividing line between the territories of rival gangs). They’re part of a church that is dedicated to social justice and bringing God’s love to the city in practical ways. 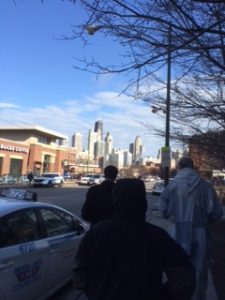 Several times as we gathered in circles on street corners or litter-strewn vacant lots to read and pray, Chicago cops rolled by slow, carefully checking out this group of young and old, black and white, some with clerical collars and one with very unique priestly vestment made of scraps of denim (that would be Brother Jim, who has ministered in Cabrini Green and the surrounding neighborhood for 30 years). 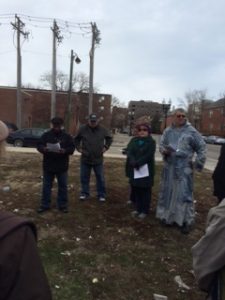 We had photocopied pages with verses for each station, but most of what happened was unscripted. We heard stories and testimonies, homilies and spoken word poetry. All of us handed out small wooden crosses on a black string to anyone walking by, wishing them a blessed Easter, inviting them to listen in. At each station, we prayed. Walking city streets to the rhythm of the stations of the cross felt about as opposite my suburban mega-church experience as you can get.

We stood in a parking lot near where the infamous Cabrini Green high rises once were, a space once called The Killing Field because it was the most violent street corner in America. It is now relatively tame with a new school and a Panera Bread around the corner. The city is always growing, changing. The changes bring hope for some, but displacement for others.

At one corner, a woman in a wheelchair stopped to listen, and teared up. She told us she had just lost a great-grandchild, age 2, found dead in his crib. We huddled around her to lay hands and pray. It was a holy moment on a street corner.

I wish I had some neat lesson for you, some great insight to share with you that I came up with on my drive home from the city. I don’t. But that’s Good Friday, isn’t it? It is a day of horrible loose ends, of unanswered questions. Jesus’ disciples had no neat lesson with which to tie up the day at Golgatha. Likewise, I have more questions than answers after walking through a Golgotha in my city.