The only constant in life is change. This is particularly true in dynamic organizations like Willow Creek, the church I’ve been a member of for three decades. While I have remained at my church, it has changed around me—sometimes for the better, but sometimes, not. I’m loyal, but also a truth teller–so I sometimes challenge the changes.

Whether we think it’s for the best or not, change is still hard, isn’t it? Because progress and change sometimes means that good things will end.

Take for example The Practice, a community within my church. We’ve met on Sunday nights for a worship service that is decidedly unlike the weekend services held in the large auditorium of our mega-church. The Practice began as an “experiment” led by Aaron Niequist, who’d previously led worship at those weekend services. A team of part-timers and volunteers worked with Aaron to build this “experiment” in creating a space for spiritual formation. The #PracticeTribe was about living the unforced rhythms of grace. It was  “an experimental gathering where we immerse ourselves in God’s dream for humanity, practice the historic disciplines that align us with His dream, and carry each other along the way. We are learning to live out Jesus’ teachings in the world.”

The Practice met at an inconvenient time (6 p.m. on Sunday) for an unconventional style of worship—much more liturgical and contemplative than what we lovingly refer to as “big Willow” services. It truly was an “experiment” and we freely tried different ways to practice our faith. Normally, at Willow, involvement looks like attendance at mega-church style services held in the 7000-seat auditorium, and volunteerism, doing a task. At The Practice, involvement was not as easy to measure, because it meant engaging in spiritual practice—from solitude to lament to listening to meditating on Scripture—during the week. As we reminded each other every week, “Sundays are not the main event.” As a community, we encouraged one another to engage in spiritual practices during the rest of the week. We prayed for one another as we sought to live our faith in our daily lives. We were a people longing for God, and praying for one another in that longing, as my friend Ruth Barton often says. Involvement could sometimes look like stillness, silence, contemplation, prayer—and perhaps, eventually, action. 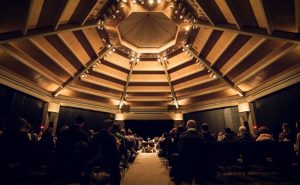 The Practice gathering in the chapel.

For many of us, The Practice became our church. I felt connected to God, encouraged and welcomed in that small gathering. I noticed that the people who attended it were often those who had a leadership role in other areas of Willow, and had been a part of Willow for a long time. Leaders who needed a place to rest, to reflect, to experience the presence of Jesus. The Practice attendance was small by Willow standards (about 200), due in part to the inconvenient time slot, and the unconventional style of both worship and leadership. Rather than having one charismatic preacher, we had a rotation of staff or guest speakers. 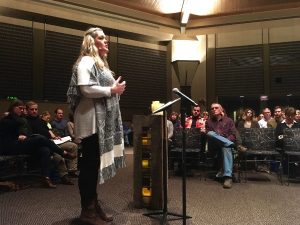 Shauna Niequist speaks at The Practice.

We heard from both men and women of a variety of ages and stages of life, from a variety of faith traditions. The focal point of the gathering, however, was not the speaker but communion every week. No white bread cubes and plastic shot glasses for us—we had loaves broken, torn, dipped. The blood of Christ, poured out. It was intimate and lovely and personal. It was at once liturgical and unscripted.

At Willow, the focus of the “big church” services is typically the message. We leave saying “wow, that was a good message.” At the Practice, we would leave saying “we encountered Jesus”—usually at the table, or in a practice of extended silence, or in a listening exercise where we shared our stories with one another. And we’d leave equipped to go out and encounter Christ again and again through our daily lives during the week. And all of those encounters—whether in the chapel, in the grocery store, in our workplace—had equal value.

But this week, we learned that the experiment is over. The Practice will meet in June, and then it will end. As is often the case at a big church, the decision is mostly financial. The “metrics” of staffing it don’t work—not enough people attend to justify the staff required to put it on. Because of the inconvenient time and limited space, and perhaps for other reasons, its growth has stagnated. And what doesn’t grow sometimes gets pruned. But how, exactly, do we measure growth?

Moments like this, I get frustrated with my church. I’m all for faithful stewardship of our resources, but I mourn our focus on numbers, and how those numbers drive decisions. While the quantity of people in chairs in the chapel might be small, each of those people has significant spiritual impact on our church. They are leading groups, mentoring people, leading spiritual retreats. For every person who attends, many others are being impacted and discipled.

The Practice equips leaders, but not with training about how to do a task, or instruction on leadership. Willow does leadership development really well, so we really don’t need more of that. But my church, though I love her dearly, seems to struggle with how to provide soul care for leaders. So it is not surprising that many leaders became a part of the Practice tribe, because that’s where they found the soul care they needed. They were filled in the quiet liturgy, the space where no one asked them to do anything besides worship.

When Jesus sent out his disciples to do some tasks (heal the sick, drive out demons, preach the gospel), they did so, and had great success. They were excited and enthused. Jesus was thrilled for them—but his next invitation to them was not task-oriented at all. He didn’t say, “strike while the iron’s hot” or “build on your momentum.” Instead, he invited them into the practices of solitude and rest. He suggested they take a retreat.

The apostles gathered around Jesus and reported to him all they had done and taught. Then, because so many people were coming and going that they did not even have a chance to eat, he said to them, “Come with me by yourselves to a quiet place and get some rest.”

The Practice is that quiet place where all of us could get some rest, and encounter Christ. Filled up again, we could love better, be more patient, serve others with a full heart, and most importantly, invite others into spiritual growth and practice. You cannot give away what you don’t have.

I’m committed to continuing conversations with Willow, who wants to take the good parts of what the Practice offered and fold them into discipleship. Part of me is skeptical—the worship service itself was a significant part of what happened at The Practice. And, how do you quantify spiritual formation? Those metrics are not easy to measure, but are so significant.

Which leads to a bigger question: what is “success” when it comes to church? Is it getting more people engaged in groups or serving? Having more people attend a service? If we measure success by making the benchmarks things that are easy to measure, or things that we are really good at already, is it truly success?

The number of people impacted by the Practice was far greater than the number attending it. But what if numbers are not the point? What if the growth that matters is growing in Christ-likeness. Not more people, but more deeply committed to Christ people?

What if the goal is that people be formed into the image of Christ? To me, that seems to be what the bible is driving at, even when Jesus tells us to go and make disciples. Disciples, not converts or small group members, even. What if the goal is to equip people to become the kind of Christ-followers who look and act like Jesus,  in whom the fruit of the Spirit is flourishing—people who are more loving, more kind, more patient, more self-controlled than they were before? People who can honestly say that Christ is at the center and influences every decision they make?

Those are harder to quantify. Spiritual formation is messy, and looks different in each of us.

The Practice wasn’t perfect. It had some flaws, as all communities do. But perfection wasn’t the goal. Rather, the goal was to provide a space for the Spirit to work. The Practice and its tribe had more influence on our big church than is immediately apparent. And it influenced churches around the world through the podcast (you can listen to it here, and I highly recommend it).

I’ve been at Willow for 30 years. I’ve been a part of many ministries, many of which no longer exist. Years ago, I was a part of a spiritual formation ministry that eventually was cut. Things change there, often rapidly. While change is inevitable, I think we need to ask ourselves what we define as success, and whether aligns with what God is doing. Many of those who were a part of the Practice will now leave. I will stay, until God tells me not to. So Willow is stuck with me. I plan to lean in to whatever spiritual formation looks like at Willow–and grieving this loss is part of my spiritual formation. In the context of community, I will engage in conversations, be the voice that sometimes feels like it is crying in the wilderness. At the same time, I will trust. Because God is still near and present.

Sunday, after the announcement and some difficult discussion, we turned to the communion table, then sang “Holy, Holy, Holy.” I was proud of our community, which sang strong despite the sadness and confusion. I looked around the room and saw that most of the people sang without looking at the printed lyrics. Eyes closed, arms raised. I thought—this little pocket is probably the few people in our church who can sing every verse of Holy, Holy, Holy with their eyes closed. We ended the gathering, as always, singing the Doxology, affirming that we will praise God from whom all blessings flow, even in times that don’t feel like blessing.

How about you? What good thing is ending in your life? How do you feel about it? It’s normal to feel grief, sadness, confusion, even anger. But here’s the thing about anger: it’s a secondary emotion. It masks what we are really feeling. So sit with Jesus and tell him about your anger, and ask him to unmask what’s under it: hurt, sadness, old wounds. Sit with what comes. Journal about it, name it. Choose to let whatever ending you’re facing be a chance to lean in to the comfort of God, the reassurance: the Holy Spirit has not left the building, and hope remains, if we hold on to it.