Therefore encourage one another and build each other up, just as in fact you are doing–The Apostle Paul, in his letter to believers. (1 Thessalonians 5:11)

My mother and I, in a flash of ambition, sort through the boxes in a closet, deciding what to keep, what to pitch, what to donate.

It’s not exactly “the life-changing magic of tidying up” because we keep more than we toss. We can’t part with a box of children’s books and another of old baby clothes (my children are now in college). We laugh at old photos and remember how much I loved A Child’s Garden of Verses, which I decide to bring home with me.

Among the boxes we find an old beige metal box, the kind people once used to hold important papers, or used as a cash box.

“Oh, this was my mother’s,” my mom says, opening the metal clasp and lifting the lid. Inside, a few thick envelopes, an old address book: papers my grandmother (who passed away in 2000, at 98) had once deemed worthy of saving.

The documents are mostly mementos of loss: the bill of sale from the home she lived in for nearly half a century, but had to sell in her 80s when she broke a hip and a two story house with the laundry in the basement and the only bathroom on the second floor became impractical; the divorce papers that documented the dissolution of her marriage after 30 years; a copy of her older sister’s will.

Also this: a compact black address book, with names written in my grandmother’s old-fashioned script. Paper-clipped to the back page are a small collection of perhaps a dozen small squares of paper, beginning to yellow on the edges. Her first name, Amy, is at the top of each one, and under that, in that careful cursive of another age, are short phrases or words.

“Quiet and faithful,” reads one. “Humility,” is inscribed on another.

They are tiny notes of encouragement, from a long-ago small group, or maybe a Sunday School class.

You’ve perhaps done a similar exercise: have each group member write something for each of the others: a positive word, what you like about that person, something kind.

“Consistent faith even in difficulties,” reads another note. “I just like her that’s all,” offers another.

“I can’t believe she saved these,” my mother says.

I can believe it. These small tatters of the past are weighty.

My grandmother, descendant of Scotch-Irish immigrants, was quiet, stoic—unobtrusive to a fault. If you asked whether she wanted ham or turkey on her sandwich, she’d say, “Oh, whatever you think is fine.” She would never ask for anything from anyone, accepting life as it came, even when it was difficult.

She was shy and quiet, sometimes melacholy. I remember her working the crossword puzzle or knitting, or sometimes just sitting and staring out the window, absently flipping with her reading glasses back and forth on the table. She never learned to drive, lived in the same New Jersey town for years, near her sisters and the Baptist church she’d attended for decades.

She never asked for anything. Those notes were a serendipity in an ordinary life, a simple life, a sometimes painful life. She hadn’t asked for these little notes—she would never have presumed to do so—but she treasured them. Clipped them into the back of her address book, where she’d see them each time she wrote a letter or card, which she did frequently.

Did she ever pull them out and just read through them, letting these fragile slips of paper strengthen her? 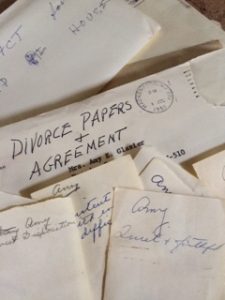 The papers intrigue me, whisper to me about the power of encouragement.

I’m often dismayed at how much of public discussion is completely devoid of civility, kindness, even good manners. Encouragement, words that build others up, are increasingly rare, and therefore precious. I’m sometimes shocked by how people who profess to be Christians can be the opposite of encouraging, appallingly uncharitable. I’m sometimes shocked by seeing this in myself. Criticism, rather than encouragement, seems to be my reflex.

We may not write on slips of paper, but most of us, every day, leave a trail of words: social media posts, comments, spoken words that either tear down or build up. What would happen if we chose to make those words encouraging? What if we made giving encouragement a daily spiritual practice, an exercise that just might change us (and the people around us) for the better?

In the book of Acts, this role is mentioned several times:

When the uproar had ended, Paul sent for the disciples and, after encouraging them, said goodbye and set out for Macedonia. He traveled through that area, speaking many words of encouragement to the people, and finally arrived in Greece, where he stayed three months. (Acts 20:1-3)

After Paul and Silas came out of the prison, they went to Lydia’s house, where they met with the brothers and sisters and encouraged them. Then they left. (Acts 16:40)

In both of these verses, Paul has just experienced some sort of difficulty: things like riots, prison–not small annoyances but pretty major problems.

If anything, Paul was the one who needed encouragement from others. Instead, he gives it.

You may be going through a rough time. You may feel discouraged. Perhaps Paul did as well. Yet he encouraged those around him. I wonder if encouraging others made him feel more brave, more determined, more, well, encouraged?

Today, give someone a word of encouragement. Whether it’s written on paper, texted, or spoken–let your encouraging words outnumber your critical ones. Build one another up.

Question: Who is someone who needs your encouragement today? How will you give it to them?