“Here is the world. Beautiful and terrible things will happen. Don’t be afraid.”

—Frederick Buechner, Beyond Words: Daily Readings in the ABC’s of Faith

In the Bible, the command repeated most frequently is “Fear not.” Or as many translations phrase it, “don’t be afraid.” Never in my life have I seen so many Christians disobeying this command so flagrantly. The level of fear in our country (especially, ironically, among Christians) is beyond comprehension.

The Bible says that love casts out fear. How can we, in this season, cast out fear? We can choose to love. We can consider God’s loving injunction: do not be afraid. Love, the Christmas story reminds us, is not just a warm feeling, but courageous action.

In the Christmas story alone, the words echo like a refrain. An angel greets Zechariah to tell him he’s going to be a father in his old age, and tells him, “Do not be afraid.” Zechariah doesn’t believe it, and is struck dumb because of his doubts. 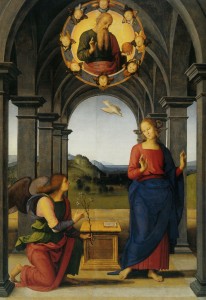 An angel visits Mary to offer her a divine assignment. He opens the conversation with an assurance of love: “You are highly favored.” When she seems bewildered, he continues: “Do not be afraid.” It’s interesting that Mary is one of the few people who respond with faith instead of fear. The voice of love drowns out the voice of fear in her heart, and she not only believes, but agrees to accept the incredible challenge of raising God’s son (not knowing whether Joseph would stand beside her in it).

Mary tells Joseph what has happened, and he doesn’t believe her. He intends to let fear win, by putting Mary aside, divorcing her quietly. (He feels self-righteous, because he could have raised a fuss, which could have resulted in Mary being punished for “adultery” which in that culture was a capital offense). Instead, he decides to just shut her out. Ban her from his life, so to speak. (Is there anyone you consider a sinner that you would like to ban or push away these days?)

Joseph plans to walk away, leaving her as a single mom in a society where that meant shame, scorn, poverty. He plans to brush off a messy situation so that he wouldn’t have to have his preconceived notions challenged. How does he feel? Angry, betrayed, hurt? We can only imagine. But we know he was afraid, because of what happens next.

The angel visits Joseph, and again says, “do not be afraid.” Because although Joseph never said he was scared, his actions and intentions showed that he was. God saw into his heart. Was this really that terrifying an assignment, or one that just required obedience despite the inconvenience? Many Christians say that they are not being fearful (or racist) these days, just practical. Um, so was Joseph. He was being immensely practical.

(Is there anything these days that might cause you to fear, to want to simply cast another away because choosing to love would be scary, or inconvenient?)

Joseph takes the courageous route of welcoming Jesus in a way that he, as a devout Jew, would least expect. He never would have thought of the Messiah coming as a squalling, needy infant, but that’s how he came. Immanuel came in a distressing disguise.

The chorus of “do not be afraid’ continues as the story unfolds.

When Jesus is born, inconveniently during a government-mandated trip to Bethlehem, shepherds out in the countryside are told of the birth with the words “Be not afraid.” It’s odd that God chose shepherds, not religious leaders or politicians, to grace with that first announcement of the Messiah’s coming. Who knows if these shepherds were even educated enough to understand the consequence of what they’d been told?

Some historians and theologians believe shepherds occupied the lowest ranks of society. They had fewer rights than other citizens, including not being admitted in court as witnesses, and a reputation for stealing and dishonesty. It’s interesting how God chose to honor those who had been told they were second-class citizens.

Other scholars point out that the work of shepherding was often relegated to young boys and girls, and women. The “little shepherd boy” you imagine in the Christmas story may well have been a little shepherd girl—again the lowest rank of society, the least important person. Someone important, religious people considered “other” and “lesser.”

Take some time this Christmas season to examine your hearts. Do you find fear there? (If you think all Muslims should be banned or deported or registered, you are afraid. If you support the candidate spewing fear and hatred, you are afraid. You just are.)