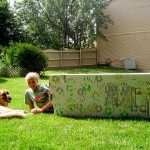 Parenting teens is not easy. This afternoon both my kids took their window screens off of their windows, to let more air in, they said. They leaned the screens on the roof outside their windows. I pointed out that the screens could easily be blown off the roof and get wrecked, and told them in no uncertain terms that they had better forget any ideas they had about climbing out onto the roof.

They said that of course they had no intentions of climbing out their windows. Of course. Yeah, right. We quickly replaced the screens.

So sometimes, you have to be very clear about your “no.” But I always try to say yes to those things that won’t cause property or bodily damages. For every “no” I try to have more than one “yes.” So today, I let my 12 and 14 year olds exercise their creativity.

Actually, they didn’t really ask my permission. They just know to leave mommy alone when she’s writing, and this was what they came up with while I was furiously trying to meet a deadline.

We replaced a water heater this week, and the large, tall box was sitting in the driveway. We also cleared a bunch of old paint that the seller left in a house Scot sold (don’t ask-as a realtor’s wife, I get pressed into all kinds of interesting tasks, including removing battered furniture and old paint left behind in homes he’s sold. On the morning of said home’s closing. In the pouring rain. Like I said, don’t ask!).

Anyway, my kids saw an empty cardboard box and old cans of paint. That’s all they needed to have an afternoon of fun. Lacking brushes, they got creative. They stuck sticks in the paint and splashed one side of the box with green, purple, gold and other colors, a la Jackson Pollack. Another side of the box ended up emblazoned with their handprints in those same colors. The third side they “signed” with their initials in spray paint. 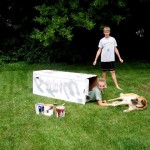 They also cut small spy holes in the side of the box, and took turns wearing it like a robot costume, and playing a version of blind man’s bluff with it. They enticed the dog into the box, which they found hilarious.

They were smart enough to do the painting out in the backyard. They know I’m a mom who would applaud their efforts to entertain themselves on a summer day, so they proudly showed me their creation when it was completed.

So my parenting advice for today is: encourage creativity, even if it’s messy. My kids are not, at least for this month, enrolled in anything. They ride their bikes, play with friends, or make crazy art projects out of cardboard boxes. They have time to just play. It brings me great satisfaction to know that my kids can entertain themselves, play and laugh together, and be creative. If the lawn or their shirts end up with a little purple paint on them, oh well.

For more photos, check out my Facebook page. If you are not on my friends list, send me a request and let me know you’re a blog reader!