Last week we gave away free copies of my new book Rest: Living in Sabbath Simplicity. Those of you who responded will be getting something from Zondervan in the next month or so. 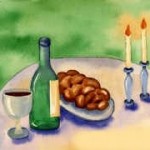 Speaking of Sabbath, I got yet another letter from a reader who wanted to know why I think Sunday should be Sabbath. Well, centuries of tradition for one thing. But, actually, it’s a legitimate question. James wrote:
“I just read your article on “A Day set apart” on Christianitytoday.com. I really liked most of it, but my problem is I am confused where you got the idea that Sunday, is Sabbath?  In your article you quote about the 4th commandment…you also quote from Genesis where the evening and the morning constitute one day. So how is it that you yourself are confused about “what day” is the Sabbath day?

“I am not a theologian,” his note continued, “but I can be logical about languages. I don’t know of one single text in the Bible where it refers to either Sunday, or the 1st day as being the Sabbath. Also both Spanish and Italian use the same word to refer to Saturday and Sabbath. In Spanish the word is Sabado. In Italian it is Sabato. Now how in the world would that happen unless some time hundreds or thousands of years ago when those languages were being developed, unless those two days were one and the same? Is Sabbath truly supposed to be a Day set apart by man for rest (i.e. any day he/she chooses) or a day set apart by GOD to spend with the people he created?”
Here are my thoughts on this question, which comes up more than any other when we talk about Sabbath.
I agree that the Bible does say Sabbath should be celebrated on the seventh day of the week. After Jesus’ resurrection, some of Jesus’ followers continued to observe Sabbath on the seventh day, and added “The Lord’s Day” on the first day, to commemorate his resurrection on the first day of the week. They did something on both the first and last days of the week. Eventually, they wanted to distinguish themselves from Jews who did not believe in Jesus as Messiah, and also from “judiaizers” Jewish Christians who insisted on following all of the Jewish law (claiming, for instance, that you could not be a Christian unless you were circumcised—see for example Romans 2 and Galatians 5). So they focused on “the Lord’s day.” It’s a change that happened slowly, over time.
An interesting thing is that the calendars in the ancient world were not the exact calendars we use today. In fact, various groups of people had different calendars, and not all of them were seven-day calendars (some were five, some were eight, some had no designations of weeks at all, only days, months and years). While the Bible does not mention “Sunday” it doesn’t mention “Saturday” either—because our modern calendar did not yet exist, so neither of those days were known by those names. A helpful resource on this phenomenon is Craig Harline’s book, “Sunday: A History of the First Day from Babylonia to the Super Bowl.” I recommend it.
You point out that in Spanish the seventh day is “sabado”–which is true: because that day was the Sabbath when that language developed. But our name for the seventh day in English is Saturday. Which came from the ancient Greek and Roman calendars, which named the days of the week for various planets (and the gods associated with each). Thus, the name Saturday came from “Saturn’s Day”–in that ancient system, the god Saturn was celebrated on that day. And when that calendar first came into use, Saturn’s Day was the first day of the week. Eventually, the calendar shifted so that Saturn’s Day and the Jewish Sabbath would be on the same day—the holy day for pagans and Jews could be on the same day. The fact we call it Saturday doesn’t mean we ought to worship Saturn on that day, of course. It’s just how that day came to be called that. Likewise, the fact that Saturday is “Sabado” in Spanish doesn’t prove that day is the only day you can practice Sabbath–it’s just how that day got its name.

At a recent retreat I led in Pennsylvania, a brave young woman spoke up. She was the single mother—her husband had left her and her two very young children. She was working to support herself and the children, and going to school at night so that she could get a better job. In obvious pain, she said that my ideas about slowing and Sabbath-keeping sounded very nice, but there was no way they would work in her life. She’d been up til 3 a.m. the night before, just getting things done so she could go to our one-day retreat. How could she possibly take an eintire day off, when she was totally overwhelmed all week?
Now, if I had told that young woman that she not only had to take an entire day off, and it had to be Sunday, or had to be Saturday, would that be helpful? Well, I didn’t think so. So I said, what would be the first step on a Sabbath Simplicity journey for you? What small part of this spiritual practice could you try? What if you said that Saturday night would be the one night you would actually get eight hours of sleep? And that evening, before bed, you would share a simple meal with your children, and look in their eyes, and tell them you love them? And if you do those two things, that is half a Sabbath right there, and it’s a really good start. It would be a gift from God, to allow yourself to get a little rest. God will guide you on your journey. Another important part of this young woman’s Sabbath Simplicity journey was letting go of trying to be the perfect parent, to make up for her husband’s shortcomings. That was way too heavy a burden, and laying it down was an important act of trust for her. And part of Sabbath Simplicity is trust.

I really am not trying to lead people astray, but rather, to help them to think about the overall pace of their lives, and to realize that Sabbath is not just a day, but a way of living. It is an invitation to freedom, not legalism.
I look at Sabbath as a spiritual practice, like prayer or Bible study. If I cannot pray in one certain way, does that mean I should give up on that practice altogether? No, I should seek God in that practice, and keep trying.
I know many people who can only support their families by taking a job that requires them to work on weekends. I know others who choose to see themselves as so indispensable that they never allow themselves a break. For those people to get stuck on the “which day” question would keep them from even trying to live in Sabbath Simplicity.
James’ question, “Is Sabbath truly supposed to be a Day set apart by man for rest (i.e. any day he/she chooses) or a day set apart by GOD to spend with the people he created?” is a good one, and I would say the answer is yes. It is a day when God tells us to set aside our labor and to rest. We must choose to do so. In various places the Bible says that God has “given” or “blessed” the Sabbath, and “commanded” us to both “remember and observe” it. So we need to set it apart, and also recognize that God has set it apart. It is a day where we meet God. But it is also a lifestyle led by God, and focused on God.

I’d love to hear your thoughts on this topic.