If you’re looking for an easy way to go deeper into God’s word, I hope you’ll join me and the team at Midday Connection on Moody Radio. We’ve created a free resource to study the New Testament, one word at a time, called The Word Matters. Based on my book Deeper into the Word, the study guides you through a weekly word study. This week’s word is “Apostle.”

What I find fascinating about this word is that it’s usage and meaning actually evolved during the New Testament time. the first apostles were the twelve men among his larger group of disciples who were to carry on the ministry. But eventually the word broadened in meaning. Many scholars believe that there was at least one female apostle, named Junia. She’s mentioned in Romans 16:7. Many Bible translators changed her name to Junias, the male form of that name. But there’s growing evidence that this godly woman was a messenger of God and recognized as such by Paul and many others.

Come join us on the Midday Connection site 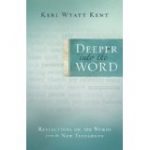 to do the study–it’s a great resource to share with your small group, or to use in your own devotional time. Do your own study on the word “apostle” and tell me what you learn!